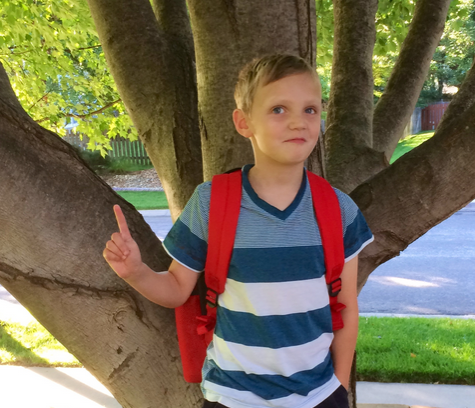 Our son was born in 2007 and almost immediately we knew something was wrong.  He was born with club feet, feeding difficulty, significant congestion and noisy breathing.  Soon after birth we took him to the hospital where he was admitted, treated and released as having severe acid reflux and bronchiolitis.  Over the next few weeks his condition worsened.  He began losing weight and missing developmental milestones such as tracking and smiling. We again took him back to the hospital where he spent several weeks undergoing numerous tests.  He was diagnosed amongst other conditions with having a rare form of Homocystinuria.  The condition was not detected by Newborn Screen. He commenced treatment immediately including daily medications together with injections and physical, occupational and eventually vision and speech therapies.

After 9 months of treatment we started to notice Carson’s eyes shifting and flickering whenever he tried to focus on something.  Over the next few months we visited several ophthalmologists in different states and they concluded that Carson had retinal degeneration. He is considered legally blind although he currently has enough peripheral vision to be mobile.  This is a progressive condition so it could worsen.

In 2009, our son’s doctors began to see some inconsistencies with other cases of this particular form of HCU leading to some doubts about the original diagnosis.  We agreed to more tests.  These tests had to be done internationally starting with tests being performed in Germany and Switzerland.  These tests were inconclusive so they were then performed in Canada. These results suggested that Carson had a different, even rarer, form of Homocystinuria.  Thankfully, this form is treated similarly to his current treatment with only a few dosage changes to existing medications.

Carson is now 7 years old.  He still has developmental delays, vision impairments, speech issues, and several other concerns, but he is doing much better than we had ever imagined. Upon diagnosis the doctors said that they could not predict what his future could be.  We continue to rely on Carson to tell us how he is doing, giving him the unconditional love, support, and every resource he needs to thrive.