The current therapeutic objective is described in the Guidelines for the diagnosis and management of cystathionine beta-synthase deficiency. Click here to view the Guidelines.

There are several approaches being investigated for the treatment of classical homocystinuria. See our Investigational Therapies Research Map.

Enzyme replacement therapy (ERT) is a medical treatment, which replaces an enzyme in a patient where the enzyme is defective due to a genetic defect.  The product currently in development for classical homocystinuria is a synthetic version of the enzyme and is expected to be administered by a subcutaneous injection.

The safety and effectiveness of ERT has been shown in the treatment of some lysosomal storage diseases including Gaucher disease type I, Fabry disease, MPS I (Hurler syndrome), MPS II, MPS VI and Pompe.  ERT does not correct the underlying genetic defect and is not a curative approach but rather requires lifelong administration.

Gene therapy is a treatment approach that involves delivering genetic material (DNA) into a person’s cells to compensate for defective genes.  The process involves using a vector (e.g. the adenovirus or common cold vector which is inactivated and has no biologic activity) to deliver the genetic material into the body.  The cells in the body (in the case of classical HCU, the liver cells) will then transcribe the DNA and produce the enzyme.  It is unknown how long the product will last and whether readministration will need to occur over time.

There are other synthetic enzymes in development that are designed to degrade methionine (so that it is not converted to homocysteine) or directly degrade homocysteine.  These are expected to require infusions, most likely on a monthly basis.

Small molecules can be chemically synthesized and often taken in tablet or capsule form, in contrast to enzymes or other “biologics”, which are made via living organisms and too “large” to be taken in tablet or capsule form so require injection or infusion.  There are a few small molecules being researched for HCU that would either activate the function of the CBS enzyme (which is a protein) or prevent its degradation, thereby increasing its effectiveness in lowering homocysteine levels.

There are other approaches to modify the metabolic pathway through modulating sulphur containing amino acids through diet and/or supplements, but this approach needs to be validated in clinical trials to demonstrate any advantages over the current approach of protein restriction and supplementation with non-methionine amino acids.

Research has shown that the administration of different metabolic compounds (not yet disclosed) can reduce levels of homocysteine in mice, and especially when combined with betaine. A new study in mice is being conducted by Ken Maclean at the University of Colorado, with a grant from HCU Network America and HCU Network Australia, to determine whether treatment with specific metabolic compounds combined with betaine could dramatically improve clinical outcome in HCU and conceivably remove the need for a methionine-restricted diet. (Dr. Maclean is also utilizing funding from the William R. Hummel Homocystinuria Research Fund to supplement this grant.)

Taurine is a naturally occurring sulfinic acid that acts to increase tissue levels of the major cellular antioxidant glutathione by exerting a cysteine sparing effect. In an animal model of HCU, the co-administration of taurine acted to normalize blood-clotting parameters, decrease inflammation in the vasculature and increased the effectiveness of the betaine response. In a recent short-term human pilot trial, taurine reversed endothelial dysfunction in human subjects with HCU.  Further studies of taurine are being considered. 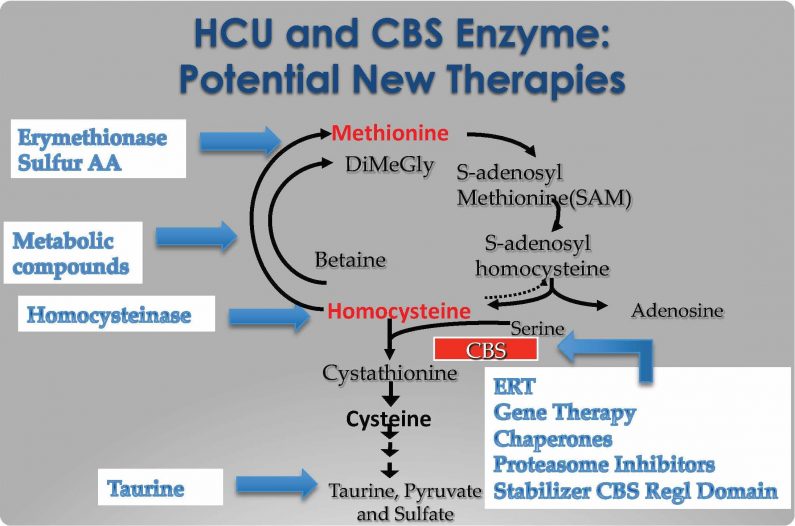