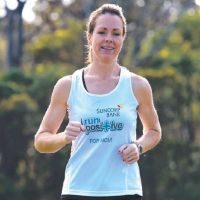 WHEN Castle Hill’s Tara Morrison and her team of runners start the 9km course in the Sydney Running Festival, it will be a significant moment for the group.

Picture: PETER KELLY Tara Morrison trains for the running festival.
Mrs Morrison and her husband Ryan started their charity HCU Network Australia a couple of months ago, and Sunday’s run will be their first fundraiser.

The charity hopes to raise awareness of homocystinuria, a disorder that affects the metabolism of a newborn child. If it is identified at birth, it is easier to treat HCU.

Two of Mrs Morrison’s three children have HCU but were not detected at birth.

“Myself, my husband and another 30 people will run with us as part of the team.

“I think it is a great event because it provides a platform to create awareness.”