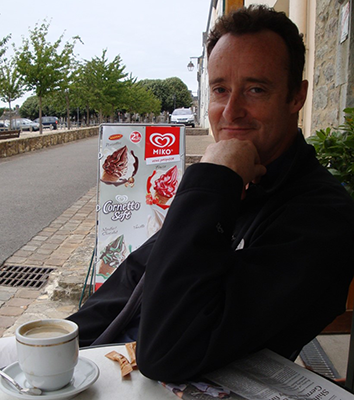 Dr. Maclean was the 1st Recipient of HCU Global Grant Research Award, an effort that is jointly sponsored by HCU Network America and HCU Network Australia to support research on potential advances in the diagnosis and treatment of classical HCU.  A grant of $40000 USD was provided to support his project to investigate the potential usage of different metabolic strategies designed to increase the efficacy of betaine to treat CBS deficient homocystinuria (HCU), which was funded through contributions from the Hempling Foundation for HCU Research, donors to HCU Network Australia and the William R. Hummel Homocystinuria Research Fund.

Tell us a little bit about yourself, Dr. Maclean?

I came from England to the United States 22 years ago. I told my wife we were only coming for 2 years – now she doesn’t believe anything I say.  My children were born here. My Ph D was in Microbiology, Biochemistry and Genetics.  I did a post doc on cancer research at the Royal London Hospital (which is famous for Jack the Ripper).  I came to the US to work in the lab of Jan Kraus at the University of Colorado, which is when I started working on HCU.  After working with Jan on the CBS Enzyme and its regulation, I became an assistant professor and got my own lab.

I decided to shift my focus to concentrate on what the consequences of the absence of the enzyme would be – how would that affect gene expression and biochemistry, and how would those changes affected pathogenesis and clinical sequelae, and how can we design treatments to affect that process and prevent those issues.  We developed a mouse model that would be better than the current one as the mice would not get liver failure so we could do better experiments.  More importantly, our mouse model of HCU is the only model that responded to betaine treatment in a manner consistent with that seen in human patients and when untreated, our mice showed a wide range of the pathogenic features common in the human disease. Consequently, our mouse model of HCU is extremely useful for understanding pathogenesis and for  both improving existing treatments and the rational design and testing of new ones.

How did you come up with the idea to study formate as a potential approach to improve betaine response?

Patients with homocystinuria due to methionine synthase/cobalamin disorders were known to have a poor response to betaine. Formate or formic acid were studied by Professors Sean and Margaret Brosnan at Memorial University in Canada, who predicted formate levels would be higher in MTHFR and Methionine synthase deficient /Cobalamin patients than in classical HCU patients. I showed this was true with 2 different mouse models and wondered if this increased level of formate might be inhibiting the betaine response in remethylation disorders i.e. does formate “poison” the betaine effect in patients with these disorders.  If this hypothesis were to be true, one might reasonably expect giving formate to HCU mice might impair their response to betaine as well. That was the theory but, adding further evidence to the idea that it’s better to be lucky than smart, we saw the exact opposite. Instead when we gave formate to our HCU mice we saw HCY levels come down by 50% and when we gave it in combination with betaine, HCY came down to near normal, even in the presence of a full methionine/protein diet. This kind of lowering of homocysteine is quite simply phenomenal and we are now working to understand the full mechanism by which it works and how to apply it safely to human patients.

So how did your study turn out to replicate these initial results?

We have replicated the initial results multiple times and showed that relatively low doses of formate combined with betaine can bring HCY levels in mice to near normal even in the presence of a normal diet.  We showed it did so at levels that would be considered safe but some safety concerns do still remain.  We also showed that other metabolic disruptions caused by HCU were lessened or completely reversed.  We confirmed that you do not see the same effect using other one-carbon donor compounds or serine, glycine or other amino acids that are capable of being converted to formate. And we also saw promising evidence of some novel strategies to increase safety and further improve the efficacy of the betaine response that we are not yet ready to disclose due to Intellectual Property reasons.

So do you think you would be able to administer the formate directly to patients?

As formate can cause issues in the body at high levels, we are working on attaching the formate to another molecule like glycerol or glucose so it can be activated by an enzyme in the GI tract and gradually released into the body.

Where will you go next with your research?

We have finished the work funded by the HCUNAs grant, so we are looking for more funding for our basic research, and I am talking to potential commercial partners who are interested in coming up with a way to formulate formate for commercial use – for example, maybe even via a genetically engineered probiotic bacteria that could be taken with food.  That bacteria would be unable to reproduce in the gut but would create a steady gradual supply of formate to amplify the betaine response.

How do you see your research being able to change patient lives?

We have short, medium and long term goals to help HCU patients.

To understand basic science as to how pathogenesis occurs using metabolomics, microarrays, RNA seq,proteomics. Using this approach, we now have candidate pathogenic mechanisms for everything that goes wrong in HCU patients and we will be investigating those further in our animal model of the HCU We also hope short term to improve existing treatment – e.g. formate added to betaine

We wish to design new treatments to allow better management and to enable HCU patients to follow a normal diet.

Any Final Words for the HCU Community?

Please know you’re not alone – we are on your side and your support is invaluable. If anyone has any questions about HCU in general or wants to talk about where the research is going, I am available (during office hours) to talk to anyone.  I know having a rare disease can be quite isolating – your neighbors don’t understand what HCU is or what it feels like and your primary care doctors may not fully understand the disease. Know that you are not on your own and that we are working very hard every day to try and improve clinical outcome for HCU!